Tessitura is a weaving process. Just like coordinates, some points, set in space, locate the body. Those fixed ‘nails’ are references for the movements : the body weaves its own route while the dance unwinds its thread.

Focusing on the negative space, the dance then reveals a vast sorting process. Movements slice, divide, select, classify, transfer and distribute, while the body rearranges the space around it. 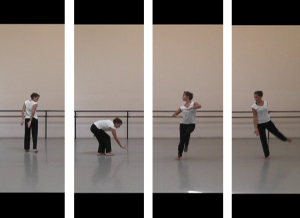 The dance both weaves and tidies up the negative space; it takes over the container and reorganises the content.

Tessitura is a brief and ephemeral signature. Flying start to disappear in a single passing. Six successive sequences unfold, repeat themselves or simply echo each other. The body remains trapped in between, just gone and not quite arrived, it does not settle anywhere. Directions are indicated but abandoned right away, persistently interrupted comments. Transitions made invisible, some images appear but immediately disappear. They come out to fix the dance in space, as to pin down the fabric.

Tessitura is a self-erasing procedure which brings emphasis on its process over its result. Simultaneously, the movements do but undo, build but unbuild. When the body finally disappears, the invisible cloth has already vanished; all that remains is the trace of an incision in the space, the shadow of a passing, the memory of successive spatial references, nails or images.